Telangana Minister for Irrigation T. Harish Rao has received an invitation for participation in the World Water Week organised by the Stockholm International Water Institute (SIWI) every year at Stockholm, Sweden, from August 23 to 28. 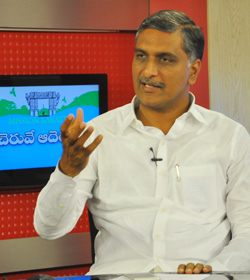 The organisers have asked Mr. Harish Rao to speak on the Mission Kakatiya programme taken up by the State government to restore and revive minor irrigation tanks, including the chain-link tank system to improve irrigation potential and increase groundwater table.

The Minister is likely to make a presentation on the subject at the meeting.

Principal Secretary (Irrigation) S.K. Joshi and Officer on Special Duty in the minister’s office Sridhar Rao Deshpande have also received the invitation to attend the meeting.

A press release from the minister’s office stated that ‘Waterman of India’ Rajender Singh has been chosen by the organisers for the Water Prize given away by them every year.

World Water Week has been the annual focal point for the world’s water issues since 1991 and the SIWI provides a platform for over 200 collaborating organisations to convene events about water and development issues every year.

It is also an opportunity for individuals from around the world to present their findings at the scientific workshops to be held as part of the event.

The event addresses a particular theme to enable a deeper examination of a specific water-related topic every year and the organisers have selected “water for development” as the theme for this year’s event.